RISING heavyweight star Efe Ajagba clocked up his sixth consecutive victory… without even throwing a punch.

Bizarrely, at the sound of the opening bell, his opponent Curtis Harper simply walked out of the ring.

The bonkers stunt left fight fans in the arena stunned, with Harper immediately disqualified for leaving the ring. 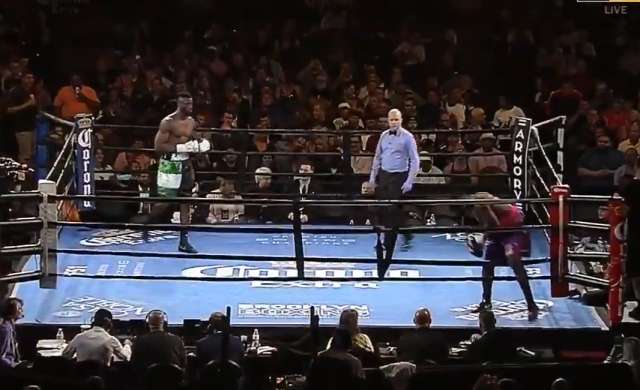 Before this “fight”, powerful Nigerian Ajagba had KO’d all five opponents he’d faced – and now boasts a 6-0 record.

The bout was being broadcast live on PBC… watched by hundreds of thousands of boxing fans across the USA.

After Harper walked out of the ring, his trainer – former lightweight champion Nate Campbell – announced he was at a loss to describe the move.

When asked what happened, Campbell said: “I had no idea.”

Campbell later posted on social media: “This man disrespected himself, his wife, the fans and me.

There have since been reports Harper walked out in a protest over pay.

The commentary team for the fight were left equally stunned, with one saying: “Curtis Harper has walked out of the ring, I can not believe this.”

The second added: “Wait, I have never seen this, he walked out of the ring.

“He is not fighting this guy, I have never seen this before in my life.”